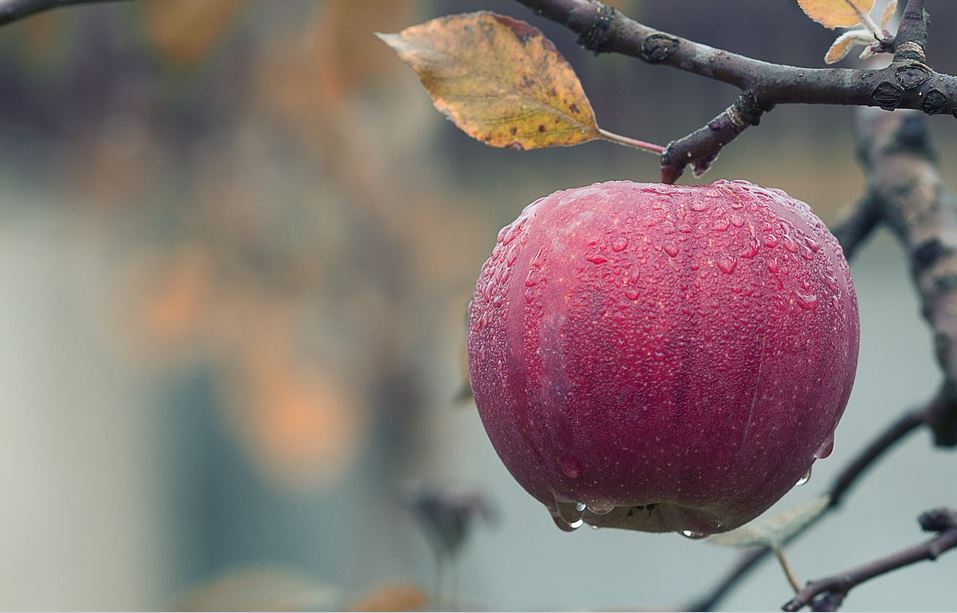 Apples being one of the most consumed fruits after bananas and mangoes, it really makes sense to know how healthy it is.

Steve Jobs used an eaten apple as the logo for a world-renowned brand, Sir Isaac Newton made a quest on gravity due to an apple incident, no doubt, it is a fruit of cultural significance and there is hardly a country that you can’t find an apple!

Not only apples provide various health benefits, but it is one of the most versatile fruits used for recipes if you know what we are talking about considering apple pie, apple cider vinegar, and applesauce to name a few.

Should You Peel Apples or Eat it with The Skin? 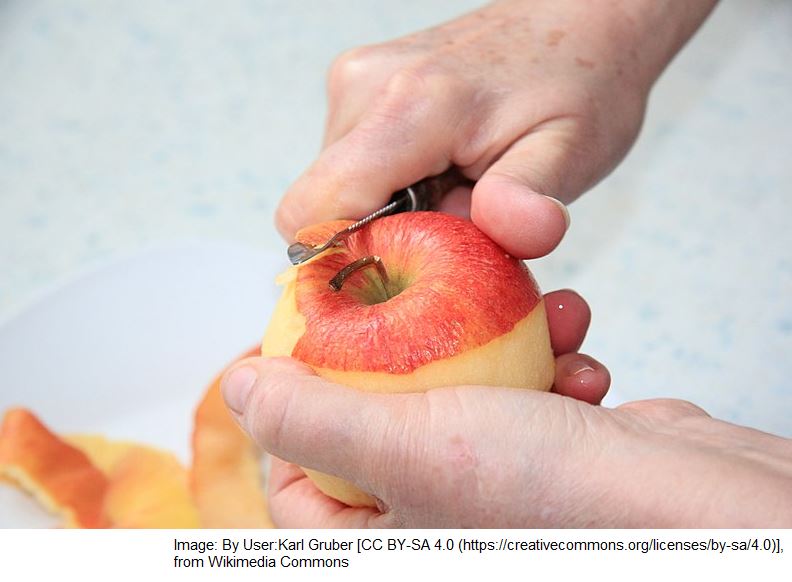 While a medium apple with skin has about 4.4 grams of fiber, an apple without skin may have only about  2.1 grams. There is also a reduction in energy, carbs, potassium, vitamin C, folate, vitamin A, and vitamin K [1] [2] if you decide to have only the flesh.

So should you peel it? We wouldn’t recommend it, but if it’s the skin that keeps you away from eating apples then, by all means, you may get rid of the skin. Well, something is better than nothing! 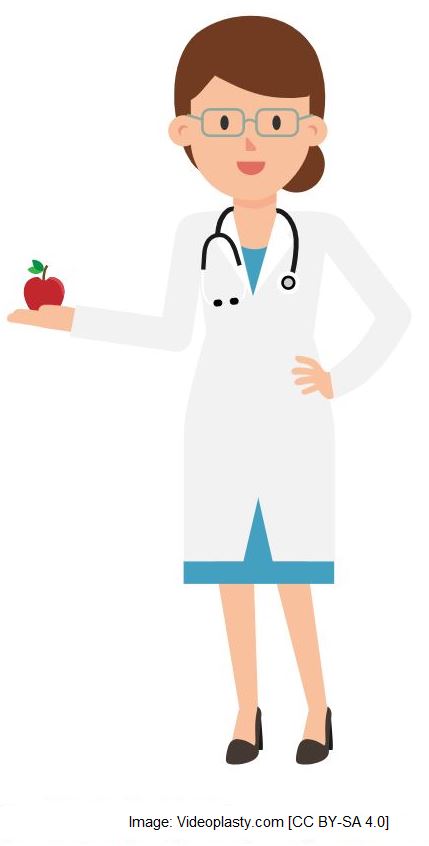 Apples are abundant in fiber and they have a special type of soluble fiber called pectin which has shown to improve digestion.

Pectin has been found to curb diarrhea-causing bacteria and it adds bulk to stools which can alleviate diarrhea.

Further, apple skin comes with a good source of insoluble fiber called cellulose which helps food pass through the digestive tract efficiently. This can ease your constipation.

According to some research studies consuming apples has shown to improve brain health and reduce the risk of diseases such as Alzheimer’s and Parkinson’s.

Apples come with vitamin C which helps in making collagen which is a protein and a crucial component found abundantly in your skin.

Collagen helps in maintaining your skin’s waterproof barrier, giving you a better skin complexion and makes you look radiant. Vitamin C is also an important element in strengthening your hair and nails.

4) To Strengthen Your Immune

Apples are rich in vitamin C and other antioxidants which can contribute towards strengthening your immunity.

According to studies, the antioxidant called quercetin in red apples can fortify and boost one’s immune, especially when you’re under stress. The soluble fiber found in apples tends to reduce inflammation and has the properties to strengthen your immune as well.

The vitamins such as vitamin C and vitamin A contained in apples are healthy for eyes as these vitamins can avoid fatigue, dryness, and help in treating night blindness while removing free radicals that would help in preventing cataract.

According to some long-term studies, people who have consumed fruits rich in antioxidants such as apples are 10-15% less likely to develop cataract.

A new study shows that consuming apples on a daily basis appeared to reduce the levels of LDL (bad) cholesterol, and other elements related to plaques and inflammation in artery walls which can help in reducing the risk of heart disease.

In another study, which involved 9,208 men and women demonstrated a strong correlation between the higher number of apples consumed over a 28-year period and having the lowest risk of stroke.

According to a 2013 research study, featured in the American Heart Association’s journal Stroke, shows that for every 7 grams increase of dietary fiber can reduce the risk of first-time stroke by 7%. You get 5 grams of dietary fiber in one large-sized apple.

Though carbs can be a cause of increased blood sugar, the carbs in apples are quite different to what you get in your junk food. A medium-sized apple has 25 grams of carbs, but 4.4 grams are fiber which is healthy [3] and has shown to be protective against type 2 diabetes while improving blood sugar control.

Regular consumption of apples has also shown to reduce insulin resistance which can result in lower blood sugar levels.

8) Reduce the Risk of Cancer

One apple gives 17% of the recommended daily amount of dietary fiber which can help in many ways of reducing cancer risk.

Excessive weight can increase the risk of different types of cancers and the role that played by dietary fiber helping in reducing the weight by increasing the feeling of fullness aids in lowering cancer risk.

Flavonoids such as quercetin, triterpenoids, and pectin (gut bacteria can use pectin, a significant part of apples’ dietary fiber to make compounds that can safeguard colon cells) have shown to slow down the development of cancers of the colon, lung, and breast in several stages of cancer development. 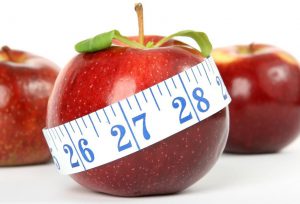 As mentioned before diets high in soluble fiber has been recommended for people who want to lose weight. This fiber attracts water and forms a gel slowing down the digestion which makes you feel fuller longer.

Apples can also fight against obesity with a compound called ursolic acid found in the skin which apparently has the ability to increase a good fat called brown fat that can improve calorie burn.

Apples have quite a unique phytonutrient called phloridzin found in the apple skin which can help improve bone density and reduce bone breakdown especially for women after menopause.

They’re also a great natural source of boron, a mineral that plays a key role in building strong bones and lowering the risk of osteoporosis.

Apples are the nature’s natural toothbrush since its fiber and thick skin can work like a scrubbing brush to reduce plaque and build-up to protect your teeth while stimulating the gum.

Eating an apple also produces saliva that can provide a rinse to get rid of bacteria and food particles.


12) To Detoxify Your Liver

A recent study from The University of Iowa reports that a natural substance found in apple peel, ursolic acid, can provide partial protection against fatty liver disease.

Furthermore, apples are rich in pectin & malic acid that can cleanse to remove toxins, cholesterol, and carcinogens from blood to promote a healthier liver.

13) Lower The Risk of Asthma

Having an apple a day may help pregnant women avert asthma and wheezing in their children.

According to a new study, women who routinely consumed apples while they were pregnant had children who were less prone to suffering from asthma or wheezing by age 5 compared with women who rarely ate apples during their pregnancy.

Nonsteroidal anti-inflammatory drugs (NSAIDs) are a type of painkillers and taking those too frequently can cause injury to the lining of your stomach.

While polyphenols found in apple peel can be useful in avoiding or as a treatment for side effects caused by NSAIDs, chlorogenic acid and catechin in apples can be helpful as well in reducing the damage to the lining of your stomach due to these drugs.

So next time when you feel lazy to eat an apple, you now know what a valuable gift nature has given you and these juicy sweet red beauties may just keep the doctor away for certain illnesses and not to be taken for granted!