Many may perceive chickens merely as a food source let alone having any recognition for their sentience & intelligence compared to monkeys and dolphins that display higher cognitive capacity.

What’s unfortunate is the fact that we have bred these animals to serve our own needs depriving them of evolving in their natural habitats while restraining their intelligence.

Just like how a scientist, a doctor or an engineer cannot reach their potential if they were denied of their education, internships & professional experience, a chicken cannot be expected to display their normal behavior or evolve as they ought to when they’re treated as commodities.

Seems like it’s not even fair to question the intelligence of farmed chickens, isn’t it?

We hope this post will shed light on the unknown facts about chickens and help change common perception.

So get ready to be amazed by some fascinating facts about chickens!

1) Chickens are social animals with hierarchies that enjoy the company of their flock. This social structure is known as the pecking order and they know their place & role in this order. Individual chickens also have distinct personalities shown by their behavior.

2) They watch and learn from each other. This is especially true when it comes to chicks who will learn a lot from their mom. They also learn from past experience and knowledge from their own environment to safeguard themselves and others in their flock being able to make decisions based on what’s best for them.

3) It has been found that chickens can reason by deduction apparently a skill that humans develop with time after becoming toddlers and an indication of the cognitive capabilities of chickens.

4) In another study, chickens have shown their numerical talents at a very early stage of their lives. 5-day old chicks were presented with 2 sets of objects carrying different quantities and were hidden behind two opaque screens. Chicks were able to identify which screen hid the larger quantity even if the quantities were changed between the screen [1].

5) Another study in 2005 led by Siobhan Abeyesinghe, at the University of Bristol, UK  gave chickens one option out of two to peck and have access to food. One option had a two-second delay with less food and the other had a six-second delay with more food. The chickens were more likely to peck at the second option which gave the higher food reward though it required patience with a six-second delay. This shows their awareness of time, anticipation of future and self-control.

6) Chickens also have developed the ability to communicate which can be vocal & non-vocal. Crowing, cackling, clucking, pecking, wing flapping, head movements, puffing their chest out and making an alarm call for danger are some vocal & body language they use. Their communication shows their self-awareness, and having a perspective of their flock and it can be compared to the communication of other intelligent species such as primates.

7) Chickens have shown to have simple & basic forms of empathy at least with regard to their offspring. Hens have shown signs of tension and would make clucking noises to alert and warn their chicks when they’re under distress.

8) If a male chicken finds a bit of tasty food he will try to impress the hens and perform a dance with a food call. However subordinate males can get attacked by the alpha male should they choose to do the same. Subordinate males use a cunning tactic by performing a silent dance if the alpha male is nearby (without getting noticed) to impress the females. These guys never give up don’t they 😉


Other Interesting Facts about Chickens

How Many Chicken Breeds are There?

According to The Behavioural Biology of Chickens by Christine J. Nicol, there could be more than 500 breeds worldwide with varying appearances. Of course, not every breed is officially recognized in all countries.

10) Yes, they can but distance is not their main purpose but to evade predators, fly above obstacles or reach high ground. This is why you may see jungle fowls roosting on top of branches. The flight distance they can achieve would depend on breed type & size.

Here are some chicken flight records: 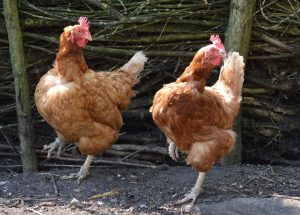 11) Just like us chickens love playing. If you observe chickens you would see how they spend time running (they can really run fast for their size and super agile), jumping, scraping, digging soil to create dust baths, jousting with other chickens. Dust baths help them to keep cool during summer.

12) Yes, chickens are omnivores and not vegetarians. In the wild, chickens forage and scratch the soil to search for seeds, worms, insects such as termites, ants, grasshoppers and could even consume animals as large as lizards, and small snakes.

What’s The Lifespan of a Chicken?

13) Lifespan could depend on the type of breed. On an average, a chicken could live for five to ten years.

How do Chickens Communicate?

14) Apparently, chickens have more than 30 variations of unique vocalizations that communicate a broad range of information with regard to territory, mating, food discovery, joy, dominance, nesting, anger, distress, danger, fear, all of which convey a different message. As we learned before chickens also use body language to communicate.

Are Chickens Related to Dinosaurs?

The sequences had a remarkable similarity to that of chickens (and birds in general). This discovery supports the idea that chickens and T-Rex share an evolutionary link.

How Do Chickens Reproduce?

16) Both the roosters and hens have cloacae which are an orifice used for digestive, reproductive, and urinary purposes. When cloacae of both the rooster and hen kiss each other called the cloacal kiss the sperm is carried into hen’s reproductive tract.

Do Chickens Have Ears?

17) Yes, chickens have ears! Chicks actually start hearing from day 12 of incubation! Their ears are not externally visible like ours and the small ear holes are on either side of their head which could be covered with feathers.

Do Chickens Have Full-Color Vision?

18) Surprisingly as far as color vision is concerned, chickens have beaten us according to a study! Chickens have structurally well-organized eyes to detect a wider range of colors and can also detect ultraviolet light as well. 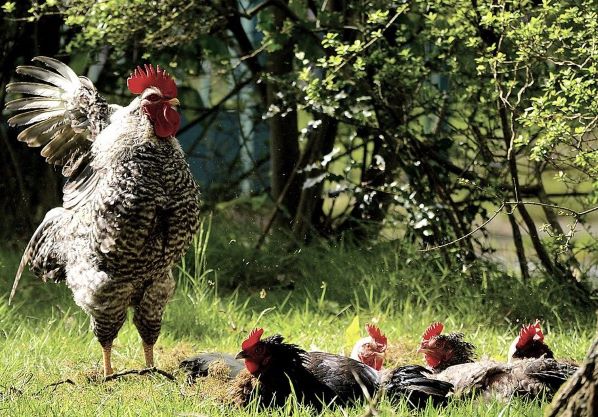 19) Roosters have a dance called tidbitting to impress the ladies and to communicate other chickens about the presence of food.

20) If a rooster notices danger, the flock will be immediately alerted with a sequence of low noises to stay close and to remain on their guard. If required roosters will attack predators and even sustain injuries or lose their lives to protect their flock.

21) Seems like hens favor roosters who perform a lot of tidbitting and they also like them to have big, bright red combs with tall points on their heads, even wattles, long spurs, and shiny & colorful feathers.

22) Hens make amazing mothers and would guard their young from predators. While brooding (incubating) hens are so protective of their eggs and once they’re hatched mama hen will be quick to shield the chicks under their wings from any harm or bad weather. Hens will sacrifice their lives to protect their babies.

23) Baby chicks are not merely tiny little creatures full of cuteness, but they’re smart. Chicks have the capacity to work with numbers up to five which apparently is better than human newborns which is three according to a study.

24) Chicks take approximately 21 days to hatch and after 18 days, they will start breaking through the shell. The hen will further support this process by clucking to help the chick out. After about 3 days the chicks should come out of the shell completely.

25) Once the chicks become bigger inside the eggs and find it difficult to get oxygen through the micro-holes of the eggshell they use their egg tooth and pipping muscle to peck and break the shell. The egg tooth falls after a few days of hatching.

So what do you think? After going through all the amazing facts about chickens do you still believe they should end up in your plate?

Worldwide, about 50 billion chickens are slaughtered each year, which means about 137 million per day.

In the wild, hens tend to lay approximately 10 to 15 eggs a year during the breeding season but commercial hens have made to become egg-laying machines to lay between 250 to 300 eggs a year with a lot of physical stress.

Did you know male chicks that are not commercially viable (as they don’t lay eggs) are ground in a macerator like waste products?

We just hope this post gave you food for thought and pave the way to make ethical food choices.

In fact going vegan would help you reap many other health benefits, besides being the most friendly diet for animals and the environment!

Guess you now know how believable the ‘Chicken Run’ movie is! 😉