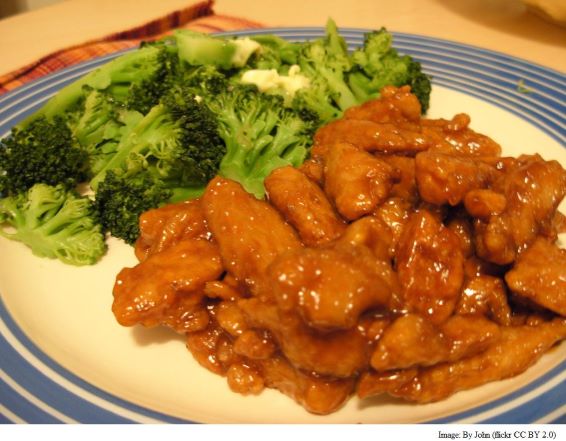 Many of our non-vegan friends may think they just can’t go vegan because of their long-standing appetite for meat.

The good news is, it shouldn’t be the case, anymore. All those non-vegans who are finding it difficult to give up on meat and the vegans who occasionally crave for something meaty, there are many vegan meat substitutes now one can turn to!

What is Vegan Meat?

Vegan meat can be considered as a sub-group of meat analog, also known as faux meat, imitation meat, and mock meat. These vegan meat substitutes are becoming more readily available every day, and there are plenty of whole food vegan foods as well which can surprisingly be turned into meaty dishes!

These vegan meat options can really simulate the real thing in appearance and texture while fooling even the most avid meat eaters in terms of taste. They can be soy-based (e.g. tofu, tempeh, TVP, etc.), wheat gluten based (e.g. seitan), whole foods (e.g. lentils, peas, cauliflower, nuts) and gluten-free (e.g. mushrooms, jackfruit).

While there are dozens of brands available as vegan meat substitutes in the market, in this post, we’re going to look at many whole food options as well, considering the health-conscious vegan.

Mushrooms have a meaty secret! They stimulate the umami taste buds in our mouths, which have a particularly savory flavor very reminiscent of meat dishes. With their rich, savory, meaty taste, they’re ideal for use as a meat substitute.

Cremini, Portobello and button mushrooms are ideal as vegan meat alternatives in virtually any recipe. As an added bonus, mushrooms which have been pre-exposed to sunlight or commercially to UV light are also an excellent source of vitamin D! 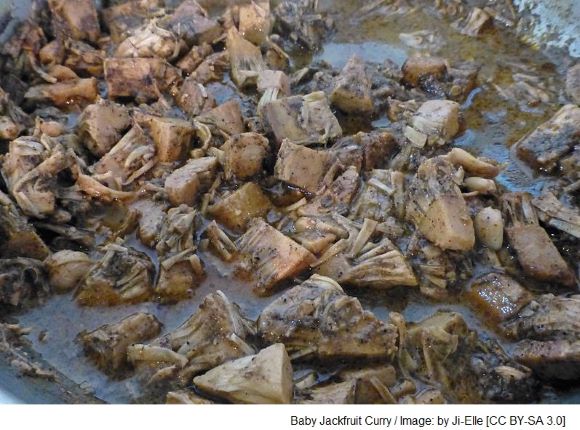 This versatile strange tropical fruit is one of those foods you just have to taste to believe.

While as healthy as any other fruit, its unusual texture and taste make it an excellent blank canvas that can be used to create a surprisingly realistic meat substitute!

Because it can be flavored with whatever spices and taste panels you like, it can be used to create dishes reminiscent of barbecue sandwiches, stir-fries, beef, chicken, or pork dishes.

It can even be roasted in the oven on a baking sheet for fifteen minutes to give a ‘chewier’ meat-like texture. If you enjoy experimenting in the kitchen and like the idea of recreating some of your favorite old meat dishes, it’s definitely worth giving it a go with some jackfruit! 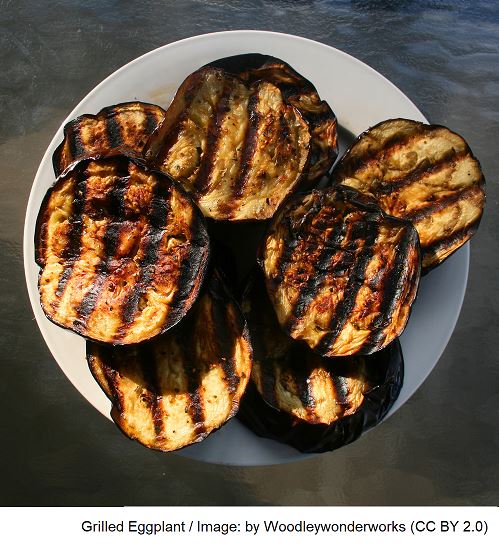 If you thought parmigiana was all you could do with eggplant, think again. The slightly spongy texture of eggplants, aubergines, or brinjals (whatever you wish to call them!) means that you can incorporate almost any flavor which takes your fancy.

Add to this the fact they are a source of fiber, B vitamins, and trace elements like copper, manganese, and potassium, incorporating them into your meals becomes a no-brainer! 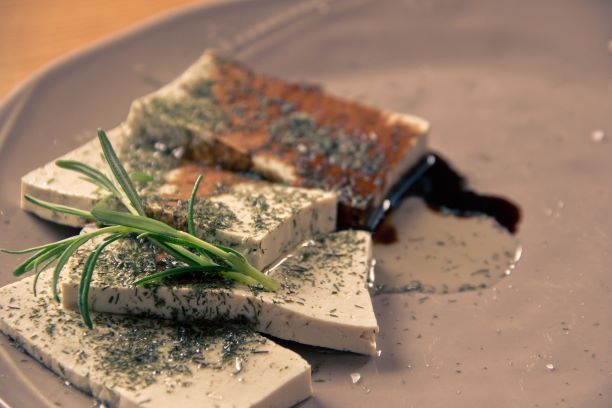 Tofu is another versatile and tasty substitute for dishes which would normally include pork, chicken, beef, and seafood. Because it is produced from soybeans, it is also a good source of protein and calcium.

Like many vegan meat replacements, it has a great capacity for absorbing flavors from spices and marinades, which can be liberally applied prior to cooking.

If you want to create a crispy texture, in a stir-fry, for example, press your tofu to get as much of the water out as possible. Start with extra-firm tofu, and take your stress out on it by pressing it! You can freeze tofu and press it later.

Getting as much of the water out of the spongy curd as possible means your strips won’t fall apart during the cooking process, spatters are less likely, and you’ll end up with crispy, well-browned strips!

You can use tofu in so many dishes, from tofu burgers, tofu noodle salad, to vegan fajitas or tofu scramble! 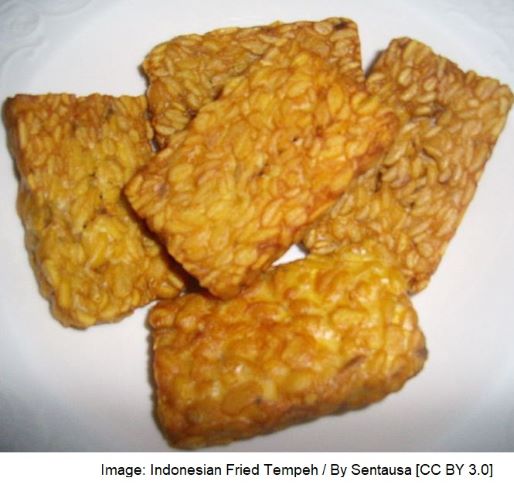 Like tofu, tempeh is made from soybeans but it is fermented and has a firmer, more grainy texture with a slightly nutty flavor. Like its close cousin, it’s a great source of protein, fiber, calcium, and vitamins, but doesn’t require pressing before cooking, which saves time in the kitchen!

Tempeh can be sliced, diced, or even ground in a food processor for use in a range of recipes. It’s particularly useful in emulating the slightly flaky texture of certain fish dishes and seafood recipes.

When processed, it becomes the perfect substitute for ground beef as well in a host of dishes such as chilies, with pasta dishes, burritos and as imitation Bolognese sauce. 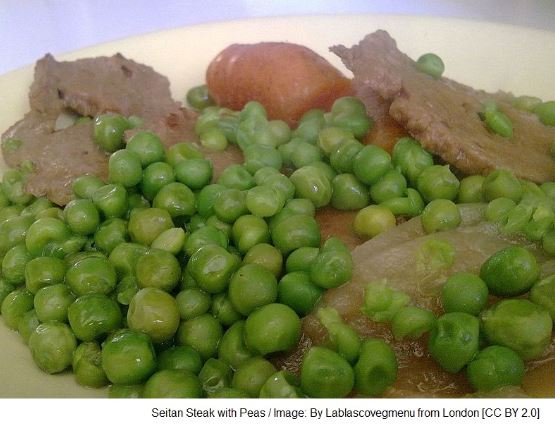 If you don’t suffer from gluten intolerance, then seitan (sometimes called wheat meat, gluten meat) can give you one of the most meat-like textures of the meat substitutes. Seitan meat is essentially processed wheat gluten, which makes it a great source of plant protein.

It can be flavored to resemble pork, chicken, beef, turkey, etc. depending on your requirements. Its dense, chewy texture makes it ideal for grilling, braising or frying because it holds together extremely well, lending itself to almost any recipe in which you want to replace meat. You can even try making your own!

It’s great for use in wraps, vegetable dumplings, chilies, kebabs, tacos, or as a tasty addition to fried rice.

TVP (sometimes known as TSP (textured soy protein), soy meat, and soya chunks) forms the basis for many of the ready-made veggie burgers and sausages you’ll find at the store, and it’s perfect for use as an occasional treat! As an added bonus, it’s easy to use and inexpensive too.

Essentially, TVP is dehydrated soy, which rehydrates and plumps up with cooking. It usually comes in chunks or small granules, which have a host of uses.

Ideal as a replacement for ground beef, and so can be used in pasta dishes, burgers, cutlets, and meatloaves.

While natto may be a popular Japanese breakfast staple, its flavor tends to associate a love-hate relationship with people!

Derived from fermented soybeans, natto has a stringy texture and a characteristic ‘cheesy’ pungent smell that can be an acquired appetite for some.

If you can look past its appearance, it’s an excellent source of calcium (providing 9% more calcium than cow’s milk per serving, at 38% of your RDA), while simultaneously being a good source of protein, fiber, vitamin K2 (which is also good for the bones and heart), iron, potassium, zinc, phosphorous, copper, magnesium, selenium and manganese to boot!

Best of all, it can be eaten raw or cooked, so is good to have on hand when you need a quick, healthy meal. Use it in maki rolls, but it’s just as useful with crepes, curries, rice, pasta, dumplings, stir-fries, burgers and soups. 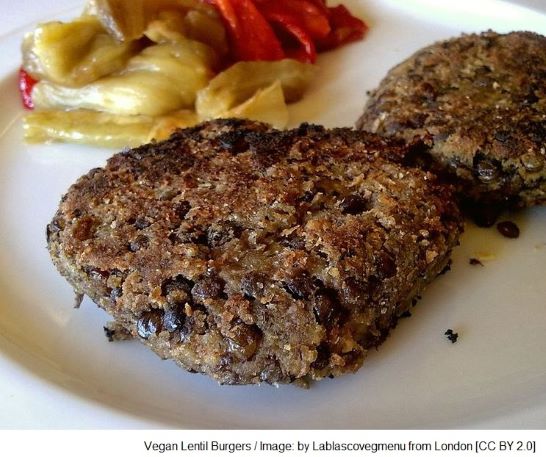 The hardworking and versatile lentil has been a vegan staple and a vegan meat alternative since the very beginning of the vegan movement. They are an excellent replacement for ground beef, and come in a variety of colors, including green, red, brown and black, all with slightly different textures.

They are incredibly inexpensive, cook easily, quickly, and because they swell up slightly with cooking, a little bit goes a long way.

Use wherever you want to replace ground beef or mince in pasta dishes like lasagna or spaghetti Bolognese, for rice and curry, in shepherd’s pie with mashed potatoes, soups, and salads.

Isn’t it wonderful that some of the best protein sources in the supermarket are also the cheapest? The hearty beans and peas come in an almost endless variety like black beans, kidney beans, pinto beans, Adzuki beans, navy beans, chickpeas, split peas, and black-eyed peas, to name a few.

Use these protein powerhouses to make healthy soups, stews, and chilies that deliver a meaty flavor in vegan style.

From quick and easy Mexican beans and rice, breakfast burritos, bean dips, Tuscan white bean soup, winter bean salads to stews in the slow cooker, no health conscious vegan should be without legumes in the kitchen! 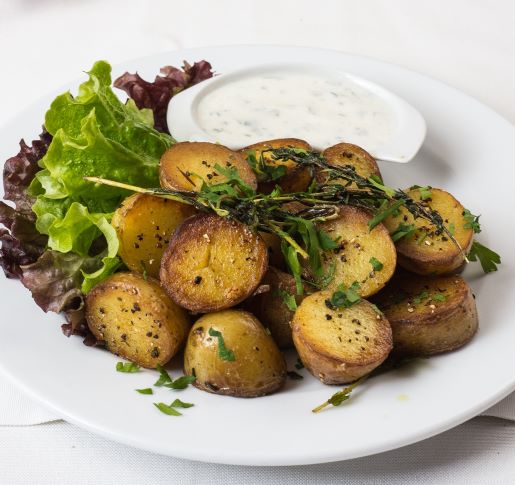 The immense range of potato dishes available to vegans and its role as a vegan meat substitute show their variety in the kitchen! Whether you like them mashed, baked, fried, boiled or roasted, your imagination really is the limit when it comes to these amazing tubers.

Try them in baked potato soup for a winter treat, fresh potato salad for summertime, baked into hearty casseroles and stews, combined with flour to make your own Indian potato roti.

You can also bake it into healthy no oil chips, have it mashed with roasted garlic served with your favorite topping, or as the usual French fries! 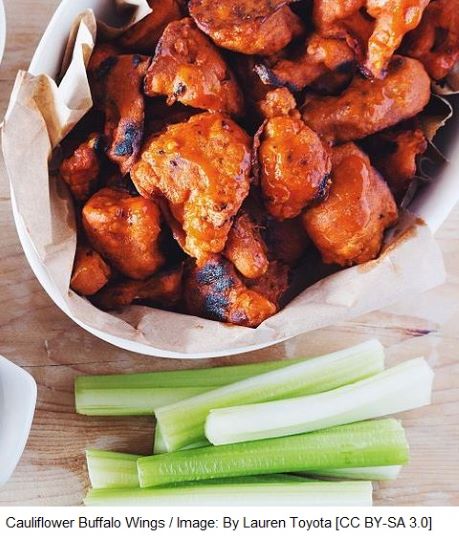 Now when you think meaty, cauliflower might not be the first food that comes to mind, but hold your horses!

With its willingness to soak up flavors and brown to a delicious golden crispiness, cauliflower actually makes an excellent replacement for chicken in many dishes, and can easily become the star at the dinner table.

Further, try cauliflower in potato bakes, as an awesome and different pizza base, spiced and served with chickpeas, as a vegan meat alternative in pasta dishes like Alfredo or Chicken à la King, roasted whole or in chunks with some nutritional yeast, and of course in creamy cauliflower soups. 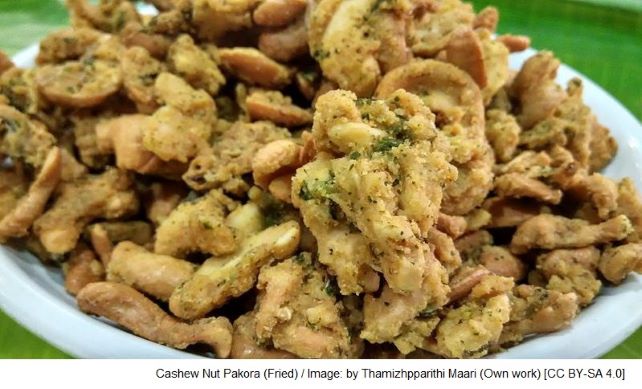 Nuts are often used in veggie burgers to add that little bit of extra meatiness and make wonderfully rich and rewarding ‘meat’ loaves, which make them an appetizing vegan meat substitute.

They’re absolutely packed with NUTrients, (yes, you can’t talk nutrition without going nuts) and are an especially valuable source of protein, calcium, vitamins like vitamin E & B, healthy fats, as well as some of the minerals like selenium and magnesium.

Though nuts are a frequent ingredient of some mouth-watering baked goods like cakes, and cookies, they are used as meat substitutes in pine nut pesto pasta, cashew and brazil nut veggie burgers, lentil and walnut loaf, walnut ‘meat’ balls, and stuffed mushrooms to name a few.

Having all these super tasty vegan meat substitutes at your disposal, you really don’t have to feel like you’re missing out on anything!

With some experience, it’s possible to replace the meat component in all your favorite dishes and come across with new and various vegan meat taste sensations along the way.

Best of all, you get to enjoy all these meaty flavors with no harm to animals!