I decided to try healthy vegan falafels and was surprised by how much flavor they have.

There’s no doubt that they’re often made with more herbs & spices than their non-vegan counterparts (meat cutlets), but it doesn’t make them any less yummy, giving a wonderful blend of rich taste coming from various beans, grains, herbs and spices!

The vegan way of life is a healthy choice for many people. As you know, it has become much more popular than ever before.

If you’re looking to try out a vegan recipe, but don’t know where to start, then this vegan falafel recipe is perfect!

It’s a simple recipe that can be prepared in just minutes with ingredients found at any grocery store and will quickly become one of your favorite dishes!

Falafel is a popular Middle Eastern dish that you may have seen at your favorite falafel joint. The deep-fried balls of ground chickpeas are served as an appetizer or with a main course, and they’re typically accompanied by pita bread, hummus, pickles, and tahini sauce.

This recipe will show you how to make falafel with chickpeas which has been a vegan staple for decades.

Falafel is a traditional Middle Eastern dish consisting of fried patties or balls made from ground chickpeas, beans, etc.

Unlike some vegan dishes that substitute meat with seitan, or tofu to create the same texture without animal products taking center stage, there is no worry here as falafels are all about being delicious and relying on plant-based ingredients.

The Nutrients in Falafel

Falafels are a great source of protein, especially for vegans who’re not consuming animal products.

To break down falafel nutrition, 100g of falafel delivers 13 grams of protein and at least 18% RDA iron which is way better than many other animal products such as chicken (7%), and deli meat (4%). There’s fiber from the chickpeas as well (falafel provides 20% RDA of fiber)!

There is no cholesterol with falafel and is worth noting that these nutrients are mostly true for homemade falafel, but frozen ones available at supermarkets may not have the same nutritional benefits (and they’re usually far less tasty).

When you take into account how much healthier & nutritious this vegan falafel dish is over some others like tofu or cheese-based dishes, it becomes an easy choice to make!

Why It’s a Special Recipe!

1. Falafel is a traditional Middle Eastern food that has been eaten for centuries.

2. Falafel can be served as an appetizer, or in sandwiches and wraps.

3. They can be made with many vegetables, and greens such as carrots, peppers, onion, garlic, parsley, cilantro, and spices…a lot of veggies!

4. This dish is very healthy because it contains protein from the beans and other nutrients from the vegetables. Get your initial mixture well pulsed with a good blender to get the maximum nourishment!

5. It’s low-fat so it’s great for people who want to maintain their weight or lose some pounds.

It’s important to note that falafel is typically served as an appetizer or part of a main dish.

When they’re fried, they can be eaten warm with tahini sauce, hummus, avocado sauce, vegan tzatziki sauce or ketchup/salsa, and other accompaniments like lettuce, spinach, tomato slices, onion, cucumbers, etc.

A few great ways to eat them is by putting them in pita bread, wrap in a flatbread (taboon bread), wrap the patties in a warm tortilla for something similar to taco filling, in burger buns, serve as part of a meze tray (assortment of appetizers), or as a stand-alone dish.

There are many variations of falafel depending on the region in which it is served. There may be a sauce, spicy chiles or pickles included with the dish to give it more flavor and texture.

What Occasions is it Best For?

This vegan falafel recipe is perfect for almost any occasion, whether you want it as a tasty homemade appetizer, for parties, picnics, or as a snack during long trips. It’s a versatile dish you can call for many occasions! 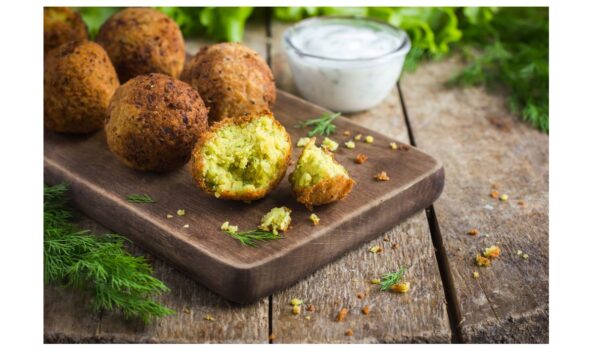 1. Avoid canned chickpeas! The falafel may fall apart while cooking when using canned chickpeas. Use dried chickpeas soaked in water for 24 hours. This will give your falafel the right thickness and taste. (tip: you may add about ½ tsp of baking soda to the soaking water to help soften the dry chickpeas)

2. Before you start making the falafel mixture, pat dry or use a salad spinner to eliminate excess moisture from the soaked chickpeas

3. To avoid falafels from falling apart, keep the prepared falafel in the refrigerator for at least 30 minutes before cooking

4. You can make falafel ahead and keep them in the freezer to be used later!

5. Make sure you don’t cook too many falafel patties at once to avoid loss of oil temperature and getting bumped into each other while cooking

6. The vegan falafel mixture will be thicker than most meat patties so it might take some time and effort to get them into neat little round shapes before frying. So don't worry if they're not perfect! They'll still taste great!

Happy cooking and enjoy this vegan falafel recipe that’s out of this world!

So, what did you think? Did we leave anything out or have any questions about the vegan falafel recipe that we didn’t cover in this recipe post?

Let us know by leaving a comment below. We are always happy to help our readers learn more and make their cooking endeavors even better!