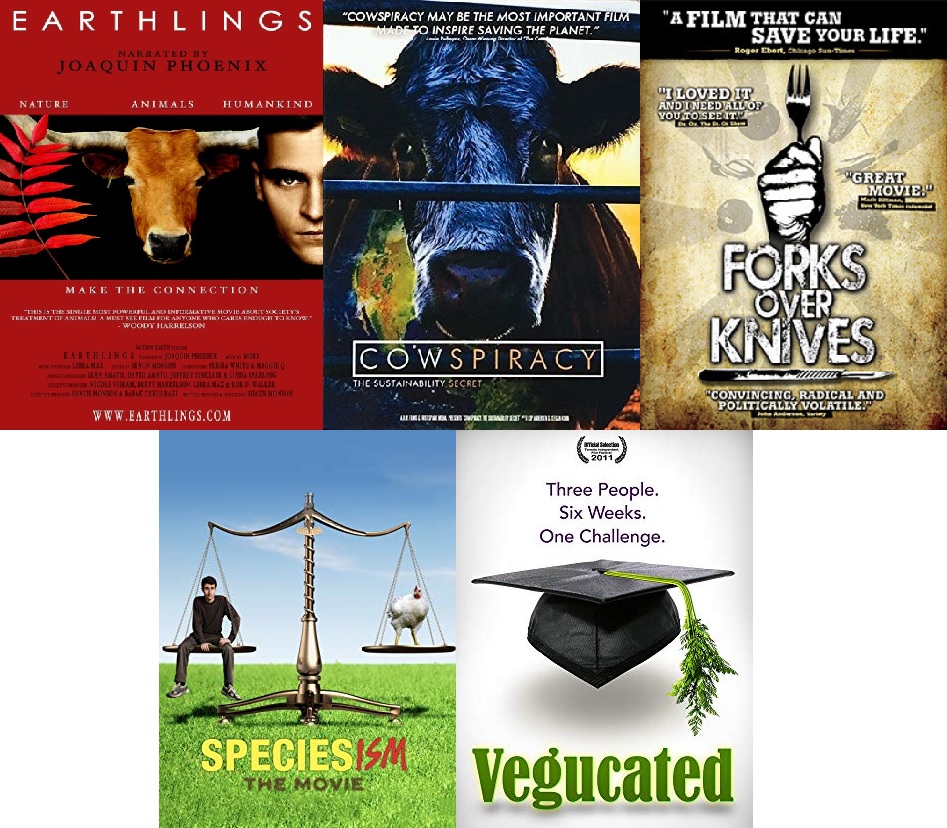 If you’re in search for the best vegan documentaries that would inspire anyone to go vegan then these are the top documentaries we can highly recommend which are great sources of knowledge & motivation.

Not only these documentaries show the violation of animal rights, but they also show the impact of meat and its production on health and the environment. The last documentary is one of inspiration that shows the vegan journey of three omnivores that decided to try a vegan diet for 6 weeks.

Watch, be inspired, and keep sharing! 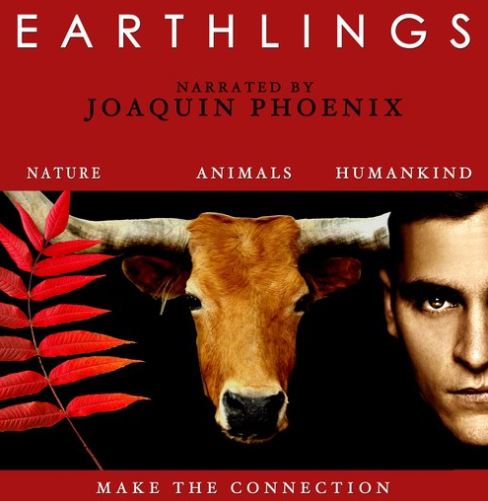 If there is one documentary that would make any human being to go vegan, it would be Earthlings.

This award-winning documentary is narrated with an impressive tone by Academy Award Nominee Joaquin Phoenix who is a long-time vegan.

Earthlings through hidden cameras and never-before-seen footage show the practices of some of the largest industries raising animals for food, clothing, entertainment, scientific research and as pets to profit.

What’s incredible about this documentary is the sheer breadth of animal cruelty it covers possibly due to years of effort by many devoted & hard working individuals.

If such atrocities are committed against humans that would amount to the most evil crimes against humanity such as the Holocaust.

Though at times it could be quite difficult to watch, it is immensely thought-provoking and well articulated with its narration & structure.

In the end, this documentary shows the importance of respecting the rights of all sentient beings and living in harmony since we are all earthlings sharing the same planet.

“If I could make everyone in the world see one film, I’d make them see Earthlings.” – Peter Singer (author Animal Liberation)

“A real testament to the quality of a film. Earthlings is amazing!” – Professor Cristina Gibson (UC Irvine)

Graphic Content? Yes (the difference is, ‘it’s real’ and happening at this very moment)

Another groundbreaking environmental documentary from filmmaker Kip Andersen uncovering the most destructive & devastating industry on the planet and inquires the hesitance by leading environmental organizations talking about it.

It shows the environmental impact of commercial factory farming such as global warming, water depletion, deforestation, species extinction, ocean “dead zones” and presents a better path to global sustainability of food demands by a growing population.

One of the most important factors emphasized by the film was that even if transportation sector (motorbikes, cars, trucks, trains, planes etc.) is eliminated, we still have to face an irreversible damage from global warming till we continue to raise so many farm animals.

Certainly, it cannot be regarded as a biased documentary with pseudoscience and the official website has a section where they have listed the basis for all the claims giving links to the relevant sources. You can check it here.

Forks Over Knives discusses how certain medical conditions & degenerative diseases can be mitigated, managed or even be reversed, by avoiding animal-based and processed foods. In other words, it promotes a low-fat, whole-food, plant-based diet in order to avoid, control or reverse diseases.

One of the most important aspects of the documentary was the findings of two scientists from the 20-year China–Cornell–Oxford Project that outlined in the book, ‘The China Study’ (2005) which investigates the link between Western diet (animal-based products & processed food) and chronic illnesses.

While the documentary shows many scientific evidence to support a whole food plant-based diet, it is also mixed with personal experiences which add more variety, making it interesting to watch!

“Here is a film that could save your life.” — Roger Ebert (Chicago Sun-Times)

If Earthlings was a difficult documentary to watch here’s a documentary with no gore that still conveys the message with an intellectual discourse about the way humans treat animals and the importance of animal rights.

Most of the animals raised for food in the US are confined in large, strange looking “factory farms,” located in remote areas mostly off the radar. But now they’re struggling to keep that secret which is one of the biggest social justice issues of our time.

A young man (director Mark Devries) begins to investigate the underworld of “factory farming” where he takes us on an alarming yet so passionate & entertaining adventure.

The documentary is shot in and around factory farms in the US, with instances of crawling through the bushes at the peripheries of the factories, flying in airplanes above toxic “manure lagoons” (which you may have never seen or believed to exist) and meeting the farm owners at times with hostility.

Along the journey, he also discovers a developing intellectual movement that considers non-human animals are as important as humans taking the viewers face-to-face with them.

The documentary features interviews with some famous scholars & philosophers such as, Peter Singer, Richard Dawkins, Gary Francione, and many others.

Since there are no graphic content it can be a great source of education for children above the age of 12.

Theme: The journey of three omnivores trying a vegan diet for six weeks

Vegucated is a documentary that follows three omnivores from New York who decide to try a vegan diet for six weeks and trying to understand what it is to be a vegan.

There is Brian a bacon-loving bachelor who likes meat and eats out all the time; Ellen, a psychiatrist and a single mom, who likes comedy and cooking; and Tesla the college student who avoids vegetables, living with her family.

Other than being tempted by stories of weight loss and regained health, they also discover the hidden sides of animal agriculture

Their journey explores the challenges they face shifting to a vegan diet and ultimately shows how they become so zealous about their new-found cause.