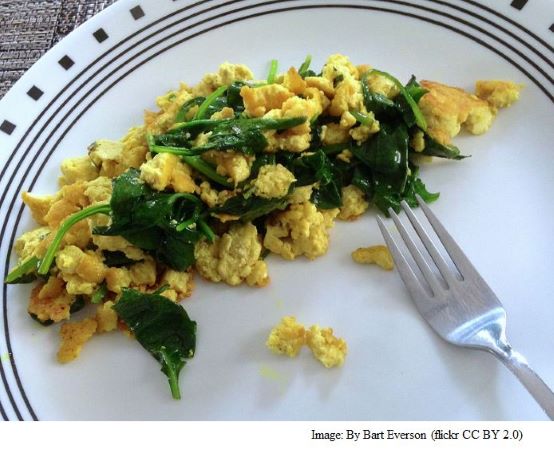 “Do vegans eat eggs?” While we prefer to forego the kind that comes out of animal exploitation or that was destined to become a cute fluffy chick, animal-friendly producers have provided an amazing range of vegan egg substitutes.

Therefore, going vegan doesn’t mean you need to give up on your favorite egg dishes or baked foods.

So how do these vegan egg substitutes work eggxactly? Well, eggs are most commonly used in four different ways—for egg dishes, for leavening, binding, and to add moisture in baking.

Let’s see how to incorporate these substitutes!

Let’s face it, there could be days when you remember scrambled eggs with toasts or perhaps a deviled egg with some fondness. Luckily, these vegan eggs are perfect for recreating all your favorite egg dishes. From branded vegan eggs to chickpea flour, these substitutes will be just as filling, flavorsome and satisfying as the real thing!

The clever guys at Follow Your Heart have impressed once again with this versatile product which can be used for scrambles, omelets, or any other egg dish your heart desires. 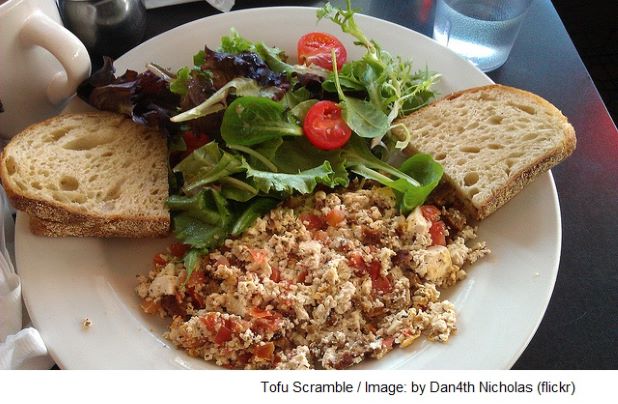 Tofu has so many uses, and making a realistic scramble is one of them! For this, start with some firm tofu, crumble it up and mix together with 1 tablespoon of nutritional yeast, 1 tablespoon vegetable broth and 1 teaspoon of turmeric for that pretty color.

Now feel free to add some of your favorite seasonings like garlic powder, paprika, and cayenne pepper. Cook gently on medium heat for around ten minutes to let all the flavors get absorbed—and voila!

While tofu doesn’t puff up quite as much as eggs, the texture is absolutely perfect for many egg dishes. Firm tofu also makes a great substitute in vegan egg salad, sandwiches, and vegan quiches.

Now here’s something to blow your mind a little…thought you’d have to give up deviled eggs? Not with this powdered egg substitute! Thanks to the wondrous thing that agar powder is, it is indeed possible!

Whisked together with the plant milk of your choice and a dash of sea salt, they create the perfect base for deviled eggs. These vegan deviled eggs can fool anyone into thinking they’re the real thing!

Eggs have traditionally been used in baking to fulfill different requirements. They act as a binding agent, to moisten the batter, or as a leavening agent to help the dough rise.  By understanding these roles the egg plays in a recipe, it becomes easy to find vegan egg substitutes for baking to accomplish the same goals.

Because eggs ‘fluff up’ slightly when heated, they are often used in baking recipes as leavening agents to help the dough rise. You can get the same results without eggs by taking advantage of below vegan options. 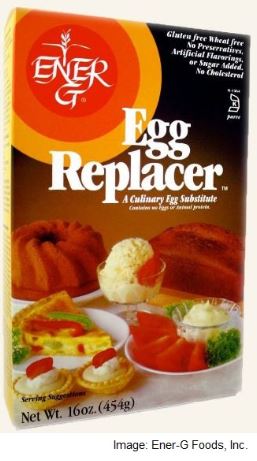 For a convenient fix, Ener-G Egg Replacer is a reliable powdered egg substitute for baking purposes which is available at health food shops and even some grocery stores. Blend 1 ½ teaspoons of the powder with 2 tablespoons of water in a food processor or blender for each egg.

Experimentation with 2 to 3 times as much powder to the same amount of water may deliver better results in some recipes. Because the powder is flavorless, it won’t affect the final taste of the baked foods and is suitable for almost every baking purpose. 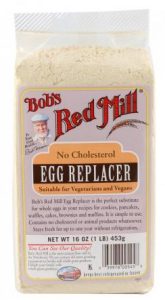 Another great option for baking, Bob’s Red Mill brand has the added bonus of being low in overall calories, and like many vegan egg replacements, free from cholesterol too. Combine 1 ½ teaspoons powder and 2 tablespoons of water in a blender or food processor for each egg.

Like Ener-G Egg Replacer, 2 to 3 times as much powder to the same amount of water may give better results for certain recipes. It is also flavorless and therefore won’t affect the taste of your baked foods. Suitable for all types of baking. 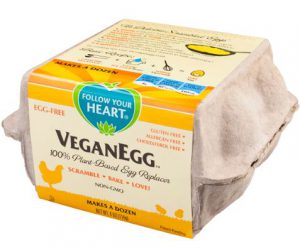 Once again it shows, how versatile this product can be! Be it quiches, cakes or using as an egg substitute for cookies, baking is much easier with this gluten-free, soy-free, Kosher and Non-GMO product from our friends at Follow Your Heart!

It’s a great general purpose egg replacer for all your baking needs. To prepare, whisk together 2 tablespoons of VeganEgg with ½ cup of ice cold water to make one‘egg’.

One of the easiest hacks for replacing eggs in a recipe is to simply replace ¼ cup of the recipe’s liquid with carbonated water. It’s important not to overmix so that you retain the carbonation within the batter.

It might sound a bit strange, but diet soda can work as a leavening agent! Use one standard can of soda to replace two eggs. This fix works especially well in cake recipes.

If you’ve ever had to scrub clean a pan after frying eggs, you’ll know just how well they can bind! Since eggs are used as a binding agent for baking, it’s very important to find proper vegan egg substitutes for them, or you might end up with a result that falls apart or just doesn’t have the right texture. 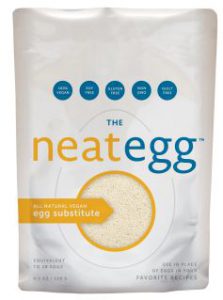 The Neat Egg is a reliable egg substitute made from a blend of chia seeds and garbanzo beans that act as a perfect binding agent for baking. Find it at health food shops and some grocery stores. To prepare, use 1 tablespoon of Neat Egg with 2 tablespoons of water per ‘egg’ and mix thoroughly. Neat Egg is also Non-GMO, soy free and gluten free.

Yes, you guessed it, VeganEgg is perfect as a binding agent too. As we mentioned above, it’s also gluten- and soy-free, non-GMO and Kosher. For each egg you need to replace, whisk together 2 tablespoons with ½ a cup of ice cold water.

When this vegan egg white substitute was first discovered, the vegan world of egg substitutes was taken by storm! Since then making vegan versions of recipes that call for egg whites has been a breeze!

Aquafaba is the liquid you usually throw away in a can of chickpeas. But boy, what a wondrous liquid that has become. For one egg white use 2 tablespoons of aquafaba, but no hard and fast rules here! Change it according to the recipe and consistency you require.

Try it with meringues, mousse, nougat, fudge, brownies or even ice cream. It is such a versatile liquid vegan egg substitute limited only by your imagination!

Do note that the liquid of other bean cans may do the job as well, but chickpea and white bean water seem to be the best. 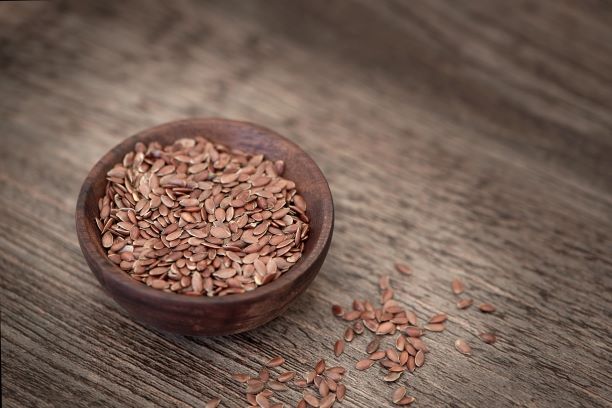 Flax seed egg substitute is one of the easiest, simplest and quite a healthy option, perfect for binding when baking. All you need is ground flax seed and water.

Simply mix 1 tablespoon of ground flaxseed with 3 tablespoons of water and leave to rest for a few minutes. The result is a viscous and gelatinous egg replacement! 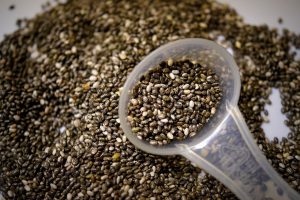 Just like flax seeds, chia seeds make a gel when combined with water that acts as the perfect vegan egg substitute, and they’re just as healthy! Mix 1 tablespoon of ground chia seeds with 3 tablespoons of water, and leave it to thicken for a few minutes.

Another useful egg substitute for recipes, which acts as a binding agent just as eggs would. Use half a banana per egg you wish to replace.

It works especially well as an egg substitute for cookies and pancakes, where the flavors complement each other. Try to avoid overripe banana as it may create quite a strong flavor in recipes.

Another useful fix as an egg substitute is mashed avocado. For each egg the recipe calls for, use one-quarter cup of mashed avocado. This works particularly nicely in chocolate cakes and brownies, as the avocado does discolor with contact to the air, which won’t be visible in a dark bake such as chocolate.

Instant mashed potatoes are a good egg substitute for dense bakes. Simply add 2 tablespoons per egg that you need to substitute.

Both cornstarch and arrowroot are great at thickening and binding, therefore make a good egg replacement in vegan baking. Either will work, but arrowroot is the less processed option. Combine 2 tablespoons of your preferred starch with 3 tablespoons of water for each egg you want to replace.

If you’re familiar with the sensation of having peanut butter stuck to the roof of your mouth you already have firsthand experience how well it works as a binding agent!

The creamy texture of nut butter works well as a vegan egg substitute for pancakes, cookies, and brownies. Choose a creamy texture rather than chunky for a better mixture, unless you’re experimenting of course! Substitute 3 tablespoons of the nut butter of your choice per egg.

We will discuss applesauce and pumpkin puree as options below, but you can use almost any vegetable or fruit puree that takes your fancy. As long as they have a smooth texture, they should do the trick! 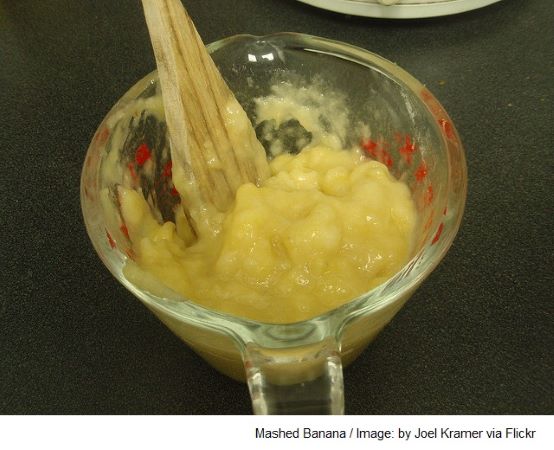 Like we mentioned above, bananas do impart their own flavor to baked food, so use these in recipes where the flavors will combine nicely. They tend to work very well, as an egg substitute for cake mix and pancakes. Make sure to use ripe bananas. Use one mashed banana per egg depending on the consistency you want to achieve. 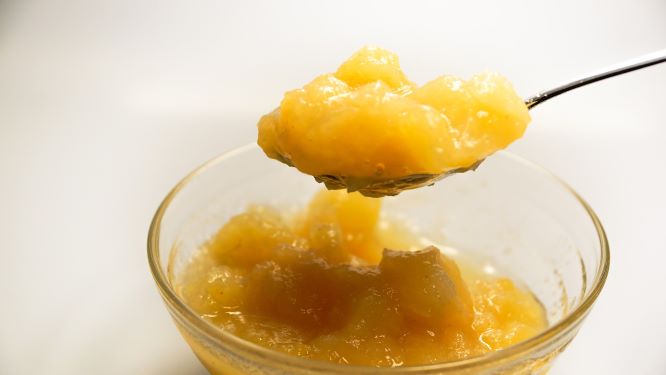 A quarter cup of unsweetened applesauce can be used to replace one egg in a recipe. Fruit purees can make the final product slightly denser than the original recipe, so if you want a lighter result, you can also add an extra half teaspoon of baking powder to your ingredients.

When using applesauce as an egg substitute it does bring some of its own flavor to the final result, so use it in foods where the flavors will go together nicely.

Pumpkin puree is a great ingredient to experiment with, and can give extra special results in breakfast treats like muffins, pancakes, and of course, pumpkin bread. As with applesauce, use a quarter cup to replace each egg.

This vegan favorite makes the perfect egg substitute in recipes where a dense texture (like brownies) and the addition of baking powder & baking soda are called for. Use a quarter cup to replace each egg in the recipe, processed in a blender or food processor until it is smooth and free of lumps.

See how easy that was? There are so many options for replacing eggs in your meals and baking that you’re actually spoiled for choice!

Whatever your favorite egg dish or baking recipe is, there’s a vegan way to them with above egg substitutes. Also the added bonus? Less worries with your cholesterol and it’s cruelty-free!