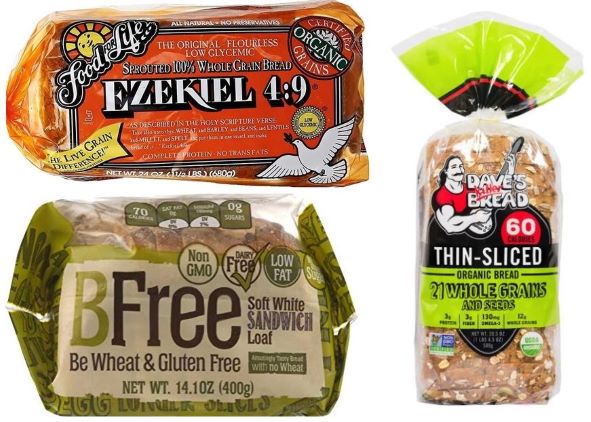 Well, it’s time to have your real bread & butter (vegan butter of course)!

Since bread is a staple and such a convenient food for vegans, you might as well buy the healthiest you can, so that your body gets all the nourishment it deserves on a regular basis.

In this review, we show the best vegan bread brands and discuss bread quality, nutrition, taste, texture, and other related details.

If you ask a few tips to choose the best & healthiest vegan bread, that would be,

But we feel below vegan bread brands have gone even further. Let’s see what they have to offer! 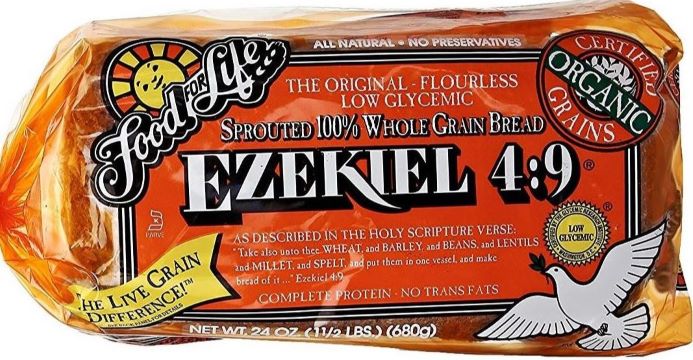 This seems like a whole grain bread dedicated to vegans with no compromise on nourishment! So vegans rejoice!

Not only it has grains such as wheat, millet, barley, and spelt, but legumes such as soybeans and lentils too.

The beauty about this combination of sprouted grains and legumes is the complete protein it creates. Besides having all the 9 essential amino acids, you get 18 amino acids coming from all the plant sources in this bread.

Being a rich source of protein, iron, and calcium, you’re assured of vital nutrients as a vegan.

They also use a unique slow-bake process, which helps in preserving the natural fiber and bran benefits of grains.

1) Phytic acid or phytates found in grains are known to be a mineral blocker or enzyme inhibitor. Sprouting breaks down enzyme inhibitors and minimizes the presence of phytic acid. This helps in bread digestion and increased absorption of minerals such as iron, calcium, magnesium, copper, and zinc [1]

2) Sprouting converts starches in grains into simple sugars aiding in digestion and nutrients such as proteins which take more energy to digest can become more digestible.

We tried it toasted. It had a very pleasing aroma while toasting. We liked the texture and straight away noticed that it’s quite solid compared to some flimsy whole wheat bread.

No falling apart after toasting and much easier to apply almond butter. It was crunchy, had a nice nutty flavor to it, and delicious keeping us fuller. Though the bread was refrigerated it still tasted fresh!

Do note that since it’s free of preservatives you may find Ezekiel loaves in the frozen food section. Make sure you thaw it before trying to separate the slices as the slices can be a bit brittle being frozen. 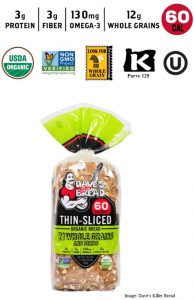 Another best-selling bread brand for vegans with loads of healthy goodness and it really is a killer and ready to rock your world! Loaded with 21 grains & seeds and packed with protein, carbs, fiber, iron, and omega 3.

All of the nutrients, quality & hearty flavor of this bread come without adding extra weight gaining calories to you where each light & thin slice has only 60 calories.

There was no issue for us to eat it plain, but we made toasts. We had it with peanut butter and it was crispy, rich in flavor and delicious. The dense consistency, grainy texture, the fiber & protein made us feel fuller which lasted for a long time compared to other common commercial bread.

What’s special is that all the hearty filling and boost come with minimum calories which help maintain weight. What a perfect bread to start your morning!

Dave’s Killer Bread can be stored at room temperature but can be kept up to 3 months longer if you store it in a freezer wrapped in a second bag. Prevent exposure to direct sunlight, heat, and moisture.

BFree soft white sandwich loaf is a product of Ireland and it’s free from gluten, wheat, soy, nuts, dairy, and eggs, making it suitable for vegans, celiacs or anyone with sensitivities to wheat, soy or nuts.

While being free from all major allergens, there is no compromise on taste, texture or nutrition being a good source of proteins, carbs, fiber, calcium and iron with no cholesterol, trans fat and saturated fat.

It is also a great choice for weight watchers since each slice comes with only 70 calories making it gluten free & guilt free!

Since our taste with regard to gluten-free bread was usually bland and tasteless, our expectations were pretty low on taste. But this brand was no disappointment. The texture was moist, soft and the taste was so real, quite delicious, and there was no cracking and crumbling.

No doubt, one of the best tasting vegan gluten-free bread brands! 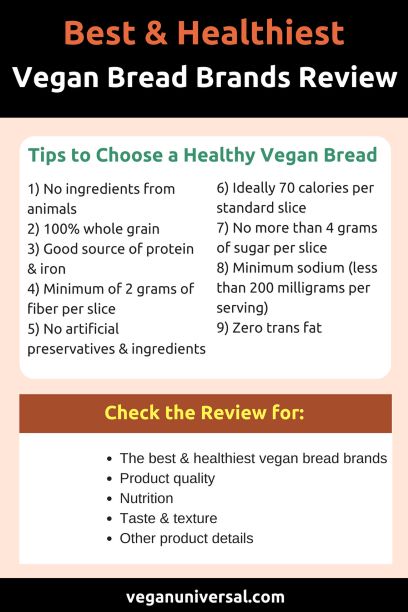 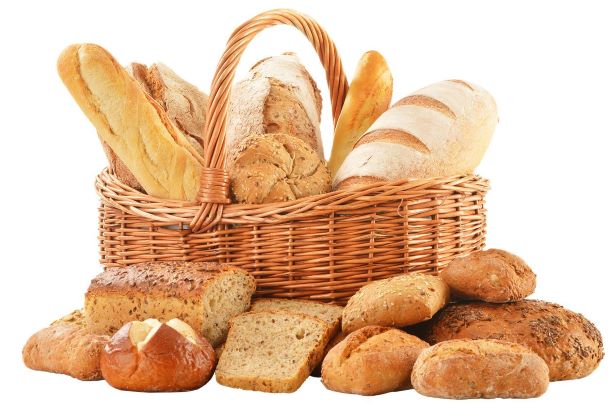 Ideally bread should be vegan if the process of making it held to its traditional roots. It takes only simple ingredients such as flour, water, salt, oil, and yeast to make bread.

But when it comes to commercial bread you see in the supermarkets, there is no assurance of those bread being vegan and there can be many confusing ingredients.

If you check the label, some bread may have ingredients sourced from animals such as below.

Non-Vegan Ingredients in Bread (ingredients with no plant source)

The good news is since bread is one of the oldest man-made foods and a staple in many countries there is a broad variety of bread brands & types you can choose in this modern era.

Hence we have discussed as many bread types as we can such as whole wheat bread (wholemeal/whole grain), white bread, sourdough bread, pita bread, bagels, pretzels, burger buns (bread rolls), tortillas, banana bread, and breadsticks in this post giving you plenty of vegan options.

Since many bread products are leavened by yeast it’s a fair question. But to put it in perspective, if you’re to avoid yeast you just have to stop breathing, literally, no kidding!

That’s how prevalent yeast is, in the air, on your skin, plant leaves, in the soil, intestinal tracts, you name it. Yeast has no central nervous system and no evidence to support it has any sentience.

So yes, yeast is vegan and not derived from animals.

How to Easily Make Vegan Bread at Home

Deciding to eat whole wheat bread is a healthy choice and definitely better than white bread!

The flour used for whole wheat bread has all three nutritious parts which are not lost during the process, the bran, germ, and endosperm.

Still, commercial whole-wheat bread may have honey, milk or whey. Always read the labels to check the ingredients.

The main ingredient of white bread is wheat flour, but it can contain milk, butter, honey, and eggs. Most white bread could be made of enriched flour and be fortified due to its lack of nutrients.

Again checking the ingredients of white bread is absolutely important to make sure there are no animal ingredients.

But in some cases, you may see ingredients such as milk, butter, buttermilk, eggs, and honey. 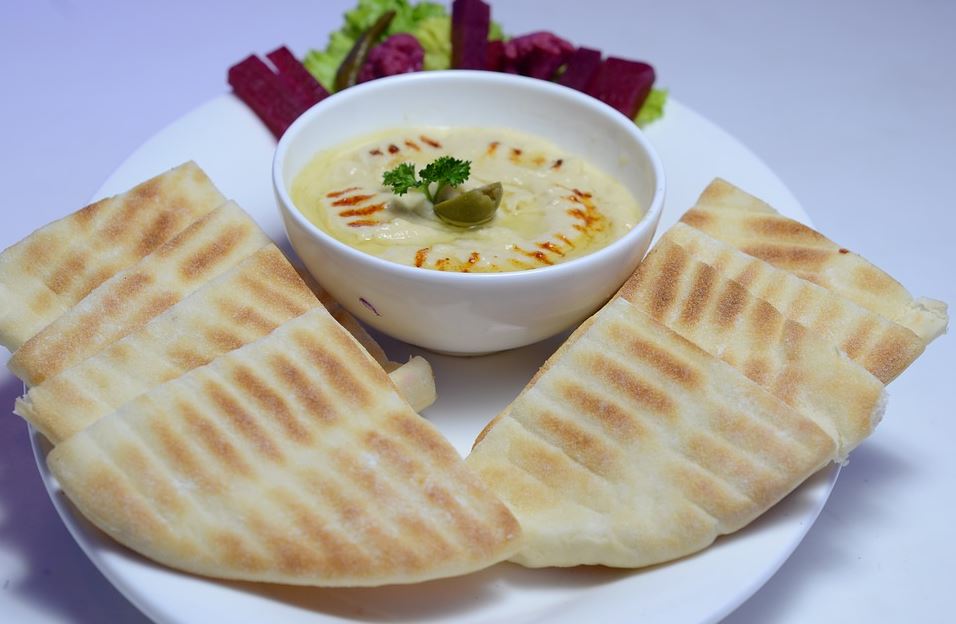 Pita bread also known as Arabic bread is one of the oldest bread products known and traditionally includes basic ingredients such as flour, water, yeast, and salt.

Thus pita bread in its original form is vegan but commercial brands may have many more ingredients.

Check for milk, eggs, honey or any other ingredients derived from animals.

Are bagels vegan? Bagels being a popular bread product, it’s useful to know whether they’re vegan.

Ideally, bagels should be vegan since they’re made of wheat dough (wheat flour, salt, water, and yeast) boiled and then baked.

Some bagels prior to baking may have been made with an egg wash on top to make it shiny and could include butter, milk, cheese, eggs, honey, and whey as ingredients.

Also make sure to avoid the egg bagels, or any toppings with cheese, butter, and honey.

Vegan Bagels (companies may change the ingredients, so double check!)

Another popular baked snack in the US and you can find it practically everywhere.

Generally, whether it’s soft pretzels or hard pretzels these are mainly composed of three basic ingredients: yeast, water, and flour.

Still, pretzels may contain lard, milk, butter, margarine, and eggs. Margarine or butter can specifically be added to make the pretzels softer and for a richer taste. Check the ingredients to be sure

Unless it’s a 100% dedicated vegan pizza which you get with some chains now, some crusts may contain milk, whey, honey and even be stuffed with cheese.

Your easiest option is to ask whether they have vegan pizza.

Below are some pizza crusts which are vegan.

The Thin ‘N Crispy or Hand-Tossed crusts are vegan (other crusts aren’t vegan as those may contain milk/whey).

Order the thin crust (others are not vegan).

Some burger buns (bread rolls) can be vegan, but not all. Many of the burger/hot dog buns can come with animal ingredients such as milk, butter, animal fats, and eggs.

So you would not want to skip reading the ingredients here as well. There’s a better chance of finding vegan buns at the bakery (in supermarkets) with fewer ingredients.

A tortilla is usually made from corn or wheat. Generally, corn tortillas which are used with tacos, enchiladas, taquito (rolled taco), quesadillas are free of any ingredients derived from animals and they can be considered vegan.

On the other hand, wheat flour tortillas which are frequently used with burritos & quesadillas contained lard in the past, but could rarely be used today. We would still recommend checking before you buy.

You may have a good chance of buying vegan tortillas at your bakeries, local markets or natural food stores and know with what ingredients the tortillas were made.

Banana bread is made from mashed bananas, but it can contain milk, butter or eggs.

You can find vegan banana bread at Dank Brooklyn.

This is one appetizer which you can safely consider as vegan. Generally, breadsticks will contain simple ingredients such as wheat flour, oil, yeast, malt, and salt.

Just check the label to make sure.

You may able to find bread suitable for vegans at local bakeries, local markets, natural and health food stores, and bagel shops.

Breads such as brioche or challah are more likely to be non-vegan as they typically include eggs or butter.

Though we requested to check the labels to read ingredients we suggest not to go overboard with it. This is why Vegan Society quite correctly included the word ‘practicable’ in their definition of veganism.

Ingredients such as mono- and diglycerides, lecithin, cholecalciferol (vitamin D3), sugar may (these ingredients can come from plant sources as well) or may not be vegan. There can also be lengthy lists of ingredients which you may not even recognize or find it difficult to pronounce.

Don’t get yourself stressed over it. Just remember the 13 non-vegan ingredients we’ve listed above and once you’ve chosen your vegan-friendly/vegan bread brands, you can continue to enjoy this convenient & staple food!