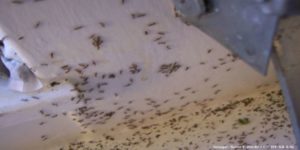 Ok, we may feel desperate to get rid of ants, when they march on into our personal space in great numbers. But hey – we’re vegans, right? If we take a few minutes to observe them, we realize how amazing these tiny little creatures can be and the kind of humane treatment they deserve.

You only have to spend a few minutes observing ants at work to appreciate just how hard-working these incredible insects really are. Even in scorching hot weather, they’re scurrying tirelessly about, collecting resources for their larvae and family groups back home.

Ants are among the most populated species of insects, living in incredibly complex well-organized groups known as colonies. Depending on the species, there may be tens of thousands or even millions of individual ants in a colony.

You ‘ant’ seen nothin’ yet!

We may think we dominate the planet, but ants can definitely give us a run for our money! They are found all over the world, with the exception of extremely cold environments like the polar regions. They’ve also been around much longer than we have. Ants first appeared on Earth some 100 million years ago. To put that in context, the dinosaurs only went extinct about 65 million years ago.

They have a nervous system, a heart [ref], and famous for their great strength, capable of carrying objects 50 times heavier than themselves. They’re also incredibly quick. The fastest ant clocks in around 855 mm per second [ref]– the equivalent of a human running at 436 miles per hour (702 km per hour). Needless to say, this is significantly speedier than the fastest production car.

Ants are environmentalists, too

Like so many creatures we wrongly label ‘pests’, ants play a crucial ecological role. Much like earthworms, ants help to aerate and mix the soil in the process of building their tunnels. They bring nutrients from the surface underground, where they can be reused by plants. Some species even partner with nitrogen-fixing bacteria which improve soil quality – a technique human gardeners replicate when they use fertilizers.

For such a tiny animal to possess so many skills and work so cohesively together as a group, ants definitely deserve a lot of respect from us!

In addition, the highly toxic chemicals used for killing ants can also be harmful to humans, our pets, and our environment.

Follow the tips below for humane, mostly natural and safe ways to control ants in your home without endangering yours and your family’s health.

Keep your kitchen and dining areas clean. The simplest way to humanely control ants is not to attract them in the first place! For a natural, eco-friendly clean, wipe down floors, counters and cabinets with a 50/50 water and vinegar mix.

Ants simply aren’t interested in environments where there’s no food they can access. Avoid leaving dirty dishes, crumbs, or food waste where they can reach. Store pet food and items like sugar and cereals in airtight containers to keep ants away.

2) Locate The Source of The Ants

When you see ants in your home, try to follow them back to the point where they entered. There are plenty of places that you might not have noticed before that can be filled in. In particular, be sure to check:

Use caulk or spray foam to seal all possible entrances into the house. Apart from keeping ants and other insects out, this may also help make your home more energy-efficient when it comes to heating and cooling!


Remember that ants are tiny, and can fit through gaps you might barely even notice. Remove any food sources first, and allow any ants inside a chance to get out before you seal openings.

In case if you find it difficult to remove ants humanely from crevices you can use anything sweet placed on a piece of cardboard or paper to entice them out and then use a glass to gently trap them and release them further from your house (if you know a colony of the same species living outside release them to the same area since it would be much easier for them to survive). Weather-stripping can also be applied under doors if they are using these as an access point.

Interestingly, ants won’t cross a line of cream of tartar. This is a particularly useful way to repel ants from doors and windows. Other natural deterrents include:


To make a handy spray for problem areas, make a 50/50 mixture of your preferred oil with water and use as needed. Alternatively, dip a Q tip or small paintbrush in the mix, and draw a border across entry points.

Another option is soaking cotton balls in the mix, and placing them in strategic locations or plugging larger gaps with them. Some people have also had success with a mixture of cucumber and water (blend as thinly as you can), which can likewise be used as a spray.

Chalk can act as a temporary deterrent as it disturbs the scent trail the ants follow.

Once you’ve started following the humane methods we’ve discussed, that should prevent ants from invading your home and keep them in their own natural habitat!