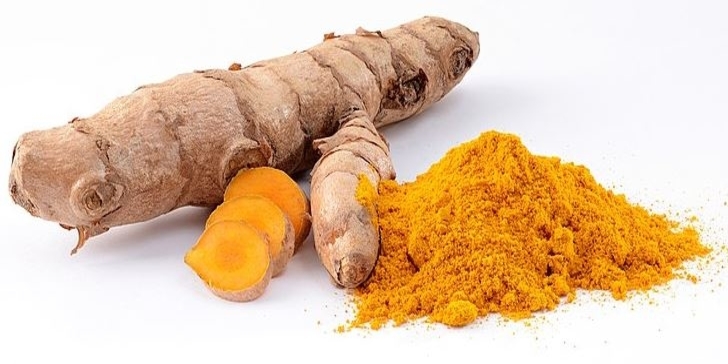 Famous as a spice, medicinal agent, cosmetic, and textile dye, turmeric is amazingly a versatile ingredient indigenous to Indian subcontinent and Southeast Asia. It is a member of the ginger family and has a deep orange flesh, which is covered in a thick brown skin.

Though turmeric is mostly used as a spice, it has a rich history as an ayurvedic healer, a holistic approach to health that has been used for more than 2000 years in Indian ayurvedic and Chinese medicine.

It has commonly been used for wound healing, pain relief, menstrual difficulties, relieve from poisoned food, rheumatoid arthritis, dispel worms, digestive issues, to strengthen the overall energy of the body, purify blood, for skin conditions, for smallpox, chickenpox, liver ailments, as an antioxidant and an anti-inflammatory agent.

Among its most important properties, turmeric contains curcumin, the principal curcuminoid of turmeric, which is known to have many health benefits and has been used as a medicinal aid and an ingredient in dietary supplements, cosmetics, and as a food additive for centuries in Asian countries.

According to research data 500–2,000 mg of turmeric per day is generally acceptable.

Let’s see some of the best health benefits turmeric has to offer,

1) Turmeric and Curcumin May Lower The Risk of Cardiovascular Disease

As you may know, cardiovascular disease (CVD) is currently the most common cause of mortality worldwide

According to one analysis done which included 649 patients, curcumin in turmeric considerably reduced serum low-density lipoprotein cholesterol (LDL-C) or commonly known as “bad” cholesterol and triglyceride levels (TG / which increase risk of heart disease) compared to those in the control group [2]

Thus turmeric may have the capacity to protect patients at risk of CVD by improving serum lipid profile.

Furthermore, according to the findings of preliminary studies, curcuminoids in turmeric may reduce the risks of heart attacks, bypass patients have, after surgery [3]

2) May Provide Relief for Arthritis

According to a 2016 industry-sponsored analysis of randomized experiments, 1,000 mg a day of curcumin lessened osteoarthritis (the most common type of arthritis) pain and inflammation similar to nonsteroidal anti-inflammatory drugs (NSAIDs) [4]

Another 2016 study showed that curcumin might aid in preventing bone deterioration in people with RA (rheumatoid arthritis) which is a chronic inflammatory disorder.

3) As an Acne Treatment and for Healthy Skin

A contributory cause of acne is bacteria known as Propionibacterium acnes, which lives primarily on fatty acids in sebum secreted by sebaceous glands, the most abundant bacteria found on human skin.

The 2013 Chemical and Pharmaceutical medical journal published by the Pharmaceutical Society of Japan showed that curcumin has potent antibacterial activity against a number of bacteria which includes P. acnes when mixed with lauric acid [5]

Curcumin also has powerful antioxidant properties and has the potential to boost the antioxidant capacity of the body to a large extent. This neutralizes free radicals (acting as a free radicals scavenger) on its own but also improves your body’s own antioxidant enzymes.

Antioxidants preserve the skin by curbing free radical production, which prevents it from degenerating the skin. They can reduce sun spots, help combat discoloration and wrinkles associated with aging, fight against skin cancer, and calm skin inflammations. Antioxidants also help in replenishing the skin with hydration and improving moisture retention to assist in revitalizing dull skin.

Another benefit of curcumin seems to be the protection it provides for skin from radiation damage, decreasing the skin irritation that usually occurs after radiation treatments for breast cancer. Overall, curcumin appears to be a favorable healing agent for radiation-induced dermatitis (radiation skin damage) due to breast cancer treatments [6]

As we learned before curcumin is a natural anti-inflammatory and antioxidant and it can affect several processes in the body.

This has a lot of benefits related to depression since those who are under depression have considerable inflammation and oxidative stress, that can impact all major organs in the body, inclusive of the brain.

Chronic inflammation can lower the levels of serotonin (which regulates anxiety, happiness, and mood) and dopamine (the feel-good neurotransmitter) that can lead to deterioration of certain parts of the brain.

It is likely that the influences of antioxidant and anti-inflammatory properties of curcumin can reinstate these chemicals & neurotransmitters to preserve the functioning of the brain, consequently making improvements in mood and motivation.

Curcumin also increases the levels of the brain hormone BDNF, which boosts the growth of new neurons and combats various degenerative activities in your brain.


5) Could be Useful in Preventing or Treating Type 2 Diabetes

According to a study done in Thailand with 240 people, curcumin inhibited prediabetes from advancing to diabetes.

When taken by mouth, curcumin may also help people with diabetes control their blood sugar levels by decreasing the blood glucose levels to a more manageable level.

Curcumin tends to provide significant benefits for both type 1 & 2 diabetes. Curcumin preserves beta cells, which produce and secrete insulin which otherwise would cause type 1 diabetes. Studies have shown that beta cells multiplied faster and had a longer life with those who took curcumin

Curcumin has also shown to improve insulin function by reducing insulin resistance which is the cause of type 2 diabetes by helping insulin get into cells.

Medical researchers often warn about mutating flu viruses that may trigger epidemics. Thus anti-inflammatory, antiviral, antimicrobial, and antibacterial properties of turmeric root is a useful herbal remedy for a number of viral diseases.

Curcumin can minimize viral replication by more than 90% of cells exposed to the influenza variants, as shown in a 2009 study. Not only curcumin reduced viral cell proliferation in host cells but also appeared to shield other cells from infection.

Curcumin may also be effective for various conditions, like dry cough

Turmeric as a medicinal remedy has been used to aid in alleviating different forms of pain. Although findings have been inconsistent, there is reason to assume that turmeric consists of active ingredients which may offer at least some relief for those dealing with a variety of painful conditions, ranging from inflammation and gastric irritation to migraine headaches and pain endured after surgery.

Some reports have shown that in some cases, turmeric may have a pain-reducing capacity comparable to that of prescribed and over-the-counter medications.

Researchers observed in a medical trial [7] a decrease in PMS symptoms after participants were treated with curcumin, the active agent of turmeric.

Results showed a substantial reduction in symptoms after supplementing over three menstrual cycles, attributing its potential for treating PMS

Turmeric and its refined extract curcumin are also used extensively to treat liver diseases due to their supposed anti-inflammatory and antioxidant effects.

It can stop your liver from being harmed by toxins because of its powerful antioxidant capabilities. This could be good news for people who are taking strong medications for diabetes or other health problems that could damage their liver with prolonged use.

Nonetheless, do note that turmeric can be a rare cause of damaging the liver, and there needs to be more examination for its safety and effectiveness if administered over a prolonged period in fairly large doses [8].

9) Turmeric May Reduce the Risk of Cancer

Turmeric is suggested as a potential cure for cancer. There’s some evidence that in a number of cancers, curcumin in turmeric can destroy cancer cells.

Evidence has demonstrated low rates of some cancers in countries where people consume more curcumin. This is over extended periods of time at curcumin amounts of around 100 mg to 200 mg a day.

A few laboratory experiments have also found curcumin has anti-cancer effects on cancer cells. It does seem capable of killing cancer cells and preventing more from increasing. It has the strongest impact on breast cancer, colon cancer, gastric cancer, and cancers of the skin.

Turmeric can aid in healthy digestion due to its antioxidant and anti-inflammatory activities.

Lately, turmeric has drawn interest for its ability to relieve IBS (irritable bowel syndrome) symptoms. IBS is a prevalent digestive tract disorder that triggers symptoms such as aches in the abdomen, diarrhea and constipation.

A 2004 preliminary study showed that humans with IBS who administered 2 tablets of turmeric daily for 8 weeks experienced reductions in stomach pain and better bowel functioning [9].


You can consume turmeric as a spice in powdered form, add it to rice, for pickle, as tea, for smoothies & juices, make mustard, or sprinkle a pinch on salads.

Below we have shared a turmeric, ginger, and lemon juice recipe video for you to get the most out of turmeric…enjoy folks!!