We have been so swift to identify and capitalize on all the financial gains to be made out of forests. But what’s our reckoning on the priceless relationship & the services of forests to the web of life?

How do we even begin to measure the value of oxygen & clean air, clean water, healthy climate, diversity of wildlife, protection from floods, landslides, and avalanches?

Go to a rainforest, and we doubt there is any yardstick to fathom the richness you experience being surrounded by trees, plants & waterfalls, the chill and the refreshing clean air you breathe, the awe of seeing the wildlife & its biodiversity, giving us the realization of being part of something bigger & magnificent!

Let’s understand what deforestation is and the leading causes of this crisis.

Deforestation is the permanent process of cutting, clearing, and removal of trees, plants and related ecosystems from a wide area into less biodiverse ecosystems such as pasture, cropland, plantations and other uses where the trees are never re-planted.

Forests have a 31% coverage of the land area on the planet. 70% of the world’s plants and animals live in forests and are deprived of their natural habitats due to deforestation, most of the threatened and endangered species live in forests, and apparently, every 2 seconds, a forest area equivalent to an area of the size of a football field is destroyed by man. 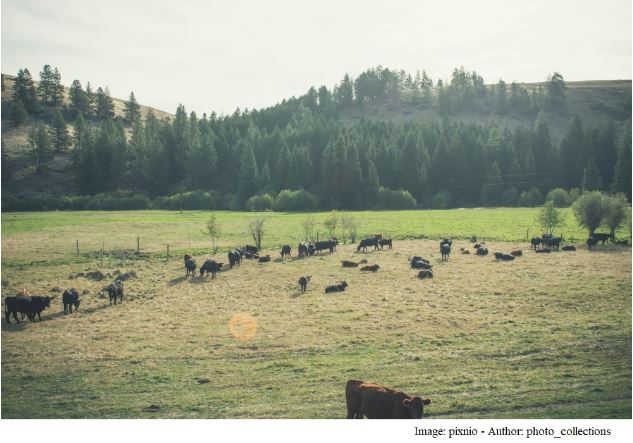 Demand for beef & its production is the top driver of deforestation.

The main ways of degradation & deforestation are:

The damage is so grave the deforestation beef production creates is more than twofold compared to the production of soy, palm oil, and wood products which are the second, third, and fourth biggest drivers respectively combined.

The other impact of cattle as pointed out earlier is that it can also convert non-forest landscapes, from grasslands to dead, unproductive land with erosion.

If you look at South America, deforestation due to beef is even more severe where beef was responsible for 71% of total deforestation between 1990 and 2005, compared to just over 17% for all other commercial & agricultural drivers combined [1]. 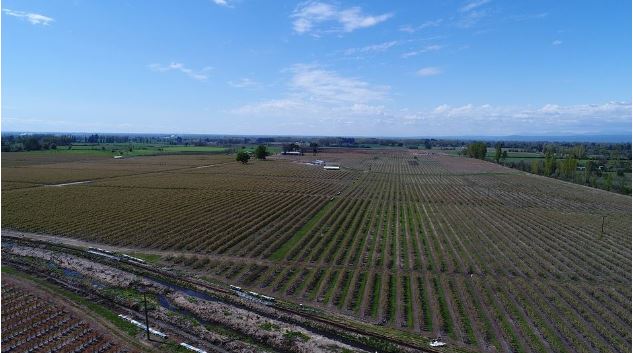 Industrial agriculture and subsistence agriculture (farming by locals to feed themselves) together is the second most substantial driver of deforestation after animal agriculture.

The most notable commercial crop agricultural drivers of deforestation include soy and palm oil production.

The biggest driver of deforestation under crop production is soybean production. Only a small percentage of soy is used for human consumption whereas 70% to 75% of it is used as feed for animal farms. Soy is used as a primary source of protein in livestock feed for cows, chickens, pigs, as well as for farmed fish.

The effect is significantly apparent in Latin America where the world’s growing demand for meat and the resultant demand for soy as feed for cattle has resulted in deforestation and devastating effects for ecosystems.

As far as the human consumption is concerned, soybeans are consumed as a curry, as tofu, soy milk, soy sauce, meat substitutes and many other soy products.

It is the most widely consumed vegetable oil on the planet and found in everything from our foods, cosmetics, cleaning products to fuels, thus one of the world’s leading deforestation drivers.

It’s a source of huge profits for multinational corporations, and biggest palm oil producers are Malaysia and Indonesia. Vast strips of forests and carbon-rich swamps are cleared for palm oil plantations, releasing a great amount of carbon into the atmosphere which influences global warming while affecting indigenous people and many endangered species.

A third to two-fifths of tropical deforestation is due to subsistence activities by local people who use the resources of rainforests for their own survival.

Besides cutting trees as building materials, they use the slash-and-burn technique where any wild or forested land is cleared and any remaining vegetation is burned for short-term agriculture. Once the land is infertile they move into a new plot which causes further deforestation. Apparently, this method of farming is used by 200–500 million people worldwide.

Subsistence agriculture consists of staple crops like maize, manioc, bananas, palms, rice and small-scale cultivation of coffee, cocoa, and cotton while forest degradation occurs due to livestock grazing as well.

An estimated 200,000 ha of deforestation is caused by tobacco farming each year and it occurs mainly in the developing world which constitutes to 1.7% of forest cover loss or 4.6% of total national deforestation.

Every year about 11.4 million metric tonnes of wood are used as wood fires and other methods for the drying of tobacco leaf.

Believe it or not, that’s an equivalent of one tree for every 300 cigarettes and to put it into perspective further, in 2012, 967 million daily smokers consumed approximately 6.25 trillion cigarettes worldwide according to the WHO estimates.

Paper is manufactured from tree fibers, either from the growing forests or recovered paper and the pulp and paper industry is a significant driver of deforestation.

Broad swathes of forest have been cut down to supply paper and since the mid-1990s, the majority of deforestation for pulp and paper production has occurred in Indonesia

Unfortunately, countries such as Indonesia, Thailand, and Malaysia don’t seem to have well-regulated certification programs in place to ensure certified sustainable forests.

The two major companies that account for 80 percent of Indonesia’s pulp and paper production are Asia Pulp & Paper (APP) and Asian Pacific Resources International Holdings Limited (APRIL) and these two companies seem to have taken advantage for years from the lack of regulation. 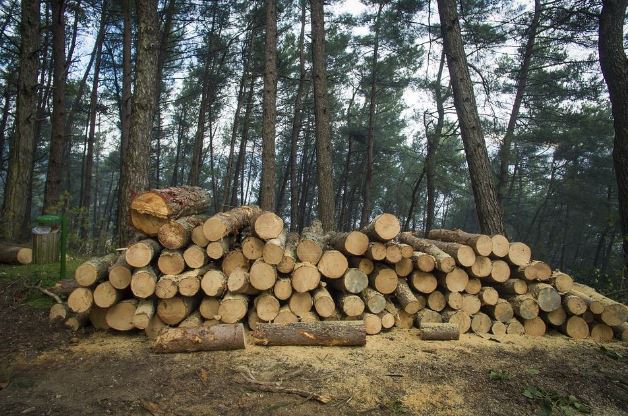 Logging for timber is the process of cutting and processing trees to meet the demand of the world’s markets for furniture, construction, and other wooden products.

Since trucks and large equipment need access into the forest and transport timber, there is a requirement to clear forests for large roadways by loggers.

Although selective logging seems to be an alternative where only one or two species of trees are cut down it doesn’t seem to help matters due to higher rates of forest fires, thinning of the forest’s protective canopy and disrupting the ecology.

The importance of forest canopy to the forest’s ecosystem is that it accommodates and protects plants, animals & insect populations, and forest floor which slows soil erosion.

Since lucrative resources such as gold, copper, diamonds, gemstones and other precious metals are found in rainforests, mining for those resources has posed an underestimated risk to tropical forests worldwide

Large-scale mining operations can result in substantial deforestation through its own forest clearing and the construction & expansion of roads which can then open remote forest areas to temporary settlers, land speculators, and other small-scale miners.

The other threat comes from wildcat gold miners that enter areas rumored to have gold deposits in pursuit of wealth. They cut trees, detonate explosives, hunt wildlife and cause erosion by clearing hillsides.

It’s obvious that the rise in population invariably results in a rise in deforestation and so far these two variables have not been mutually exclusive.

According to a report by the United Nations Framework Convention on Climate Change:

All these human activities which cause deforestation tend to rise with the rise of population.

Wildfires can be considered a cause of nature and a natural element of many forest landscapes, but occurring at the wrong time, place, frequency and intensity can cause devastation.

As a matter of fact, each year millions of acres of forest around the world are annihilated or degraded by fire.

Furthermore, fire is often used as a convenient way for humans to clear forests for uses such as crops.

It is true that forest loss can be both a cause and an effect of climate change.

Typically rainforests (especially tropical rainforests) are quite humid due to the water vapor released along with oxygen, but when trees are cut down, the humidity levels can drop.

This can cause the remaining plants to dry out and increase the risk of fire damage and can destroy forests rapidly. 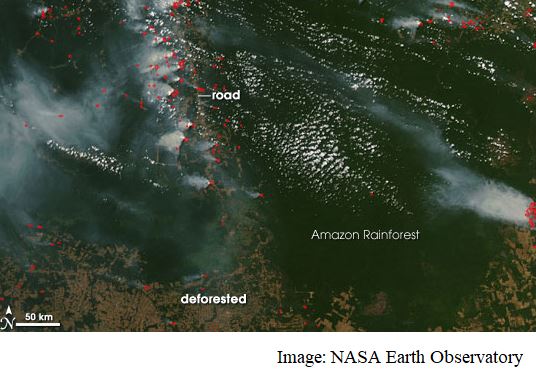 Although much criticism regarding the drivers of deforestation is focused on activities such as logging and commercial agriculture, such large-scale activities have been made possible only through infrastructure, such as roads, railways & bridges for transportation, energy projects such as dams and irrigation.

For an instance, the expansion of road networks in ecologically rich areas such as the Amazon Basin or the Indo-Malayan tropical forests of Southeast Asia has aggravated deforestation.

According to one study, most of the deforestation occurs within 5 km of a road or navigable river.

Since humans began to harness fire, wood has been used as a primary fuel and it is still a major source of energy for people from developing countries.

Though wood fuel may not be a major cause of deforestation on a global scale compared to other drivers of deforestation, it can still have a serious effect at local level.

A difference between firewood and charcoal is that charcoal usually comes from trunks or large branches and requires cutting trees. Charcoal has many different uses such as cooking fuel, metallurgical fuel, industrial fuel, automotive fuel, as a carbon source, used for drawing, and used as a medicine for digestive issues.

As you can see, since there are many uses of charcoal, it is one of the causes of deforestation and a lot of trees have to be cut down to meet the varied demand.

In 2009 the deforestation of tropical countries due to charcoal production was estimated to be at less than 7%.